The other day, I was in a clothing store with my mom, and she totally called me out. I picked up an off white – crew neck – pullover sweatshirt, and said, “oh, I neeeeeed this!” And she promptly responded, “Sadie, you have at least 10 of those already…”  Point taken, but she wasn’t 100% correct.

Long story short, I live for a crew neck white/off white/heather grey sweatshirt/sweater. I am not a fan of hoods on sweatshirts or jackets (I never use them and they get in the way). And I love a zipper for the right reasons, but not on my sweatshirt, thank you. So crew neck pullovers are the style for me.

So now let’s talk about all the sweatshirts I desperately need:

Let’s start with a basic at the Gap: 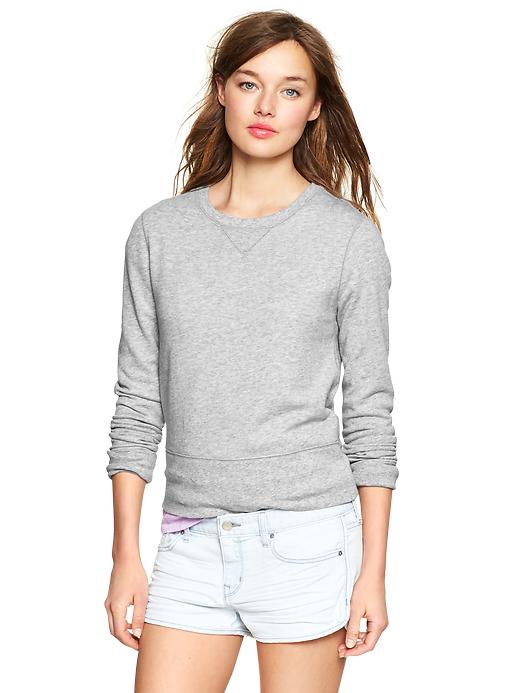 I could probably wear this sweater from the Loft every day: 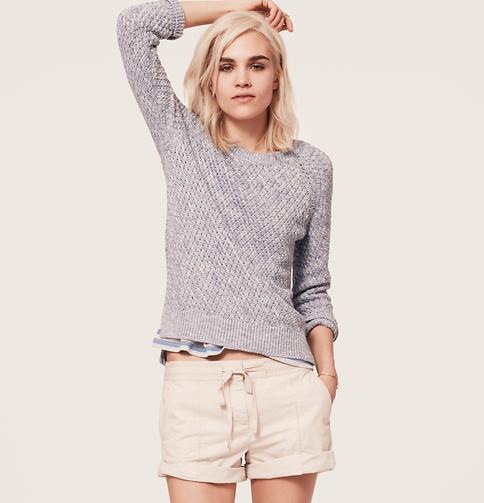 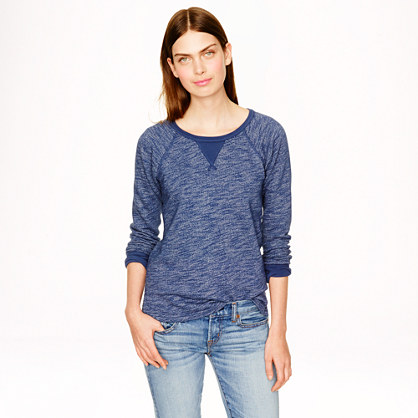 A little more detail from Hive & Honey at Piperlime (for your dressier sweatshirt occasions): 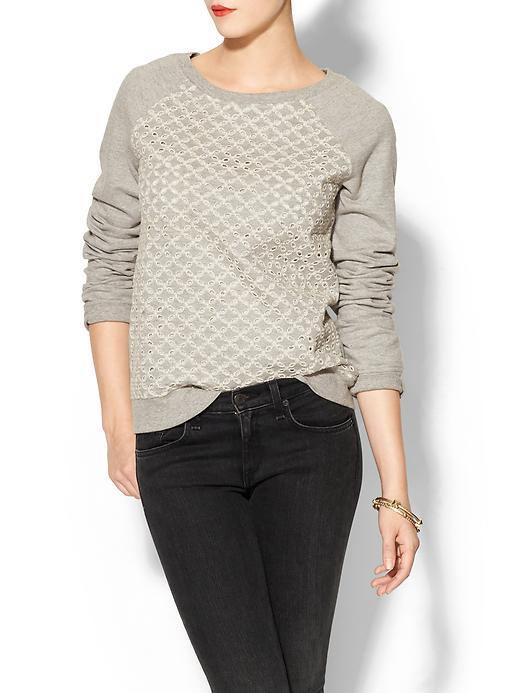 When I’m feeling sporty, there’s always the Athleta version that I’ve been eyeing for months because it’s a great fabric: 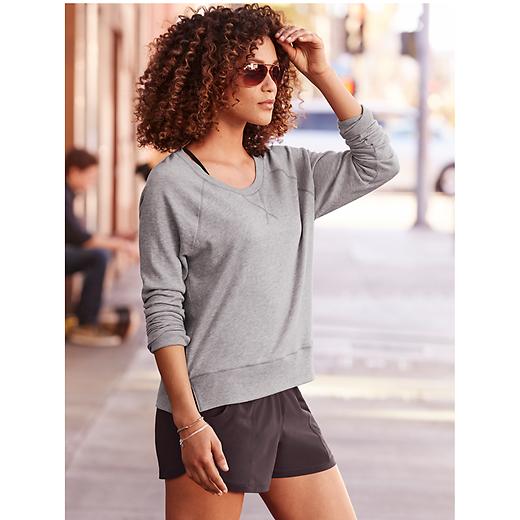 And finally, the only one I actually own among this group. This v-neck sweater is perfection from JCrew Factory: 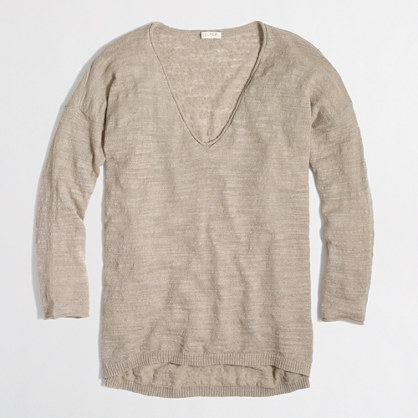 I am nothing, if not consistent.

I stopped by my parent’s house a couple weekends ago, which my mom, of course, sees as the perfect excuse for a family trip to the theater. Then the stars aligned when a production of Irma La Douce was showing for a limited run during the visit. 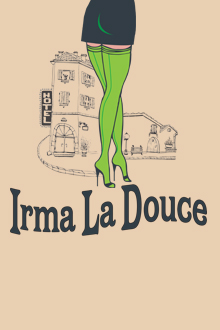 Pardon me as I use my pointer finger to push my glasses up the bridge of my nose, but for those unfamiliar: Irma La Douce is a musical that premiered in Paris in 1956, then went to London in 1958 and Broadway in 1960 (thanks Wikipedia). It’s about a Parisian prostitute who meets a man she wants to be faithful to, but alas, shenanigans ensue. It’s kind of like Pretty Woman but in the ghetto of Paris, and Richard Gere doesn’t have any money, so he comes up with schemes to keep Julia from selling herself. Plus a lot of other weird plot twists.

My family has been listening to the original Broadway soundtrack from the 1960 production since forever, and have been aggressively campaigning for a new revival on Broadway (in our living room). So the fam assembled at Rue 57, one of our go-to pre-theater restaurants, and then we finally saw Irma in person. 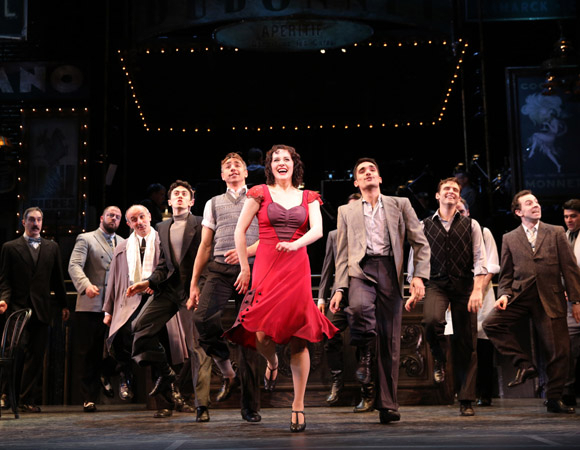 I will say two things about this production.

1. The orchestra was fantastic. The xylophone was unbelievable.

2. The rest of it left something to be desired.

Most of all, I just wish they had put on full-on French accents for the whole production. The actors often spoke in American accents then sang in French accents, it was inconsistent. I really think they need to watch Gigi and just do a French accent for the whole show like Gaston in Gigi. To be honest, I think most things would benefit from being a little more like Gigi.

At the end of the day, it just lacked the full “je ne said quoi” that a french musical should have. Dis-donc?

songs I downloaded on iTunes (because it’s been too long for just five).

1. Problem by Ariana Grande (feat. Iggy Azalea). I saw Jimmy Fallon lip sync Iggy Azalea’s Fancy, last week when he was battling with Emma Stone (he said she was the best lip syncher ever, but I thought Joseph Gordon Levitt was better). Anywho, when I looked up Iggy on iTunes, I came across this gem, and I was glad I did. 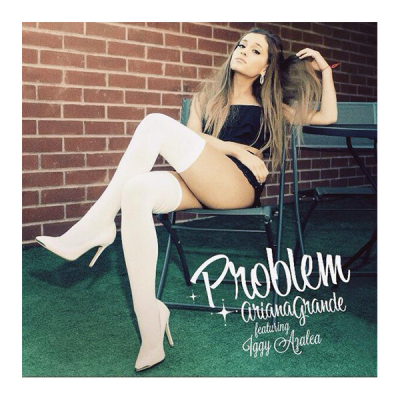 2. Downtown Girl by Hot Chelle Rae. This was a Pandora discovery for me. Just a fun, boy band-y song. Hot Chelle Ray reminds me of Cobra Starship.

3. Grow Up by Cher Lloyd (feat. Busta Rhymes). Another Pandora discovery for me. I think this comes on my One Direction Pandora station. I love Cher Lloyd and her punky style.

4. Ladie’s Choice by Zac Efron (from Hairspray the movie). This is another Pandora find. I love Hairspray but this wasn’t in the Broadway soundtrack that I’m used to. That being said, I love anything Zac Efron, so count me in! 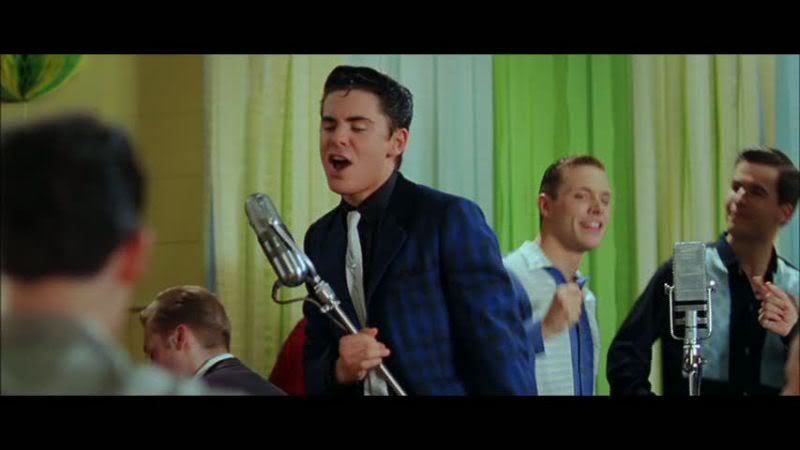 6. Mmm Yeah by Austin Mahone (feat. Pitbull). So now both Austin Mahone songs that I’ve downloaded are entirely about Austin scoping girls who walk by. Meanwhile, the video is such a late 90’s throwback. Mmm hmm, yeah, yeah.

7. Popular Song by MIKA (feat. Ariana Grande). There was a lag on this song. I was obsessed with it a few months ago, but I didn’t actually download it until a couple weeks ago. It samples “Popular” from the Wicked Broadway soundtrack, plus has two of my favorite singers. How could it be bad?

8. Birthday by Katy Perry. This song is super fun! It’s a little weird that it’s kind of birthday specific. It feels almost like I’m listening to a Christmas song out of season. But, Katy Perry just keeps the hits coming!

9. Am I Wrong by Nico & Vinz. It took me about ten listens of this song to actually listen to the lyrics. I liked it originally for the different sound/beat, but it’s actually pretty thoughtful.

10. Little Willy by Sweet. This is the throwback of the group. Classic rock has never really been my genre, but every once in a while, a song like this sneaks into my repertoire.

PS-I must confess, I’ve had my eye/ear on “She Looks So Perfect” by 5 Seconds of Summer. I guess I’m just boy bands for life! This song might be next on my playlist… 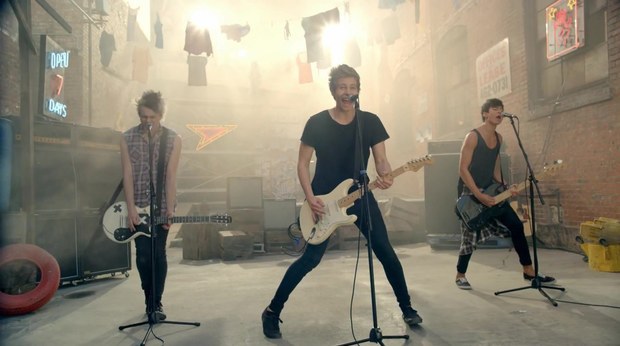