On Sunday and Monday, my house became Fort Todd.  It became a refuge for 5 residents of Stone Harbor, just one of the barrier island communities of New Jersey.  I made sure that my guests felt like my home was their home away from home while we were waiting out the storm.  As it turns out, I was able to be a great host as we were fortunate enough not to lose electricity until late Monday night.  I was able to make a spread of comfort at each meal.  I must say that mealtime really brings people together to appreciate each other.

I feel blessed to report that our small community of the 7 mile island was fortunate enough to survive the storm with only a few bumps and bruises.  Unfortunately, not everyone was as lucky as we were.  My heart goes out to those who do not have homes to go back to and to those whose businesses were pulled out from under them.

I inspected the bakery this morning and found it to be in near perfect condition.  You can see all the reed grass piled up outside the door, but somehow the water managed to stay outside.  My dad piped silicone around the door frame to keep out the water but I never thought that would be enough to stop nature from taking its course.  I’m not quite sure what act of God left the bakery almost untouched, but I certainly made sure to thank Him for his protection.

There have been horrifying pictures all over the news this week of destruction and devastation.  In all of this tragedy, I realize that we must enjoy the life we have created because you never know how it will change overnight.

I vividly remember the first time I had French Onion Soup.  I was 11 or 12 years old and I was at my best friend’s brother’s Bar Mitzvah.  The party after the ceremony was at The Cranbury Inn, probably the only legitimate sit down restaurant in our town.  We were served the soup in the tradition soup crocks coated with melted cheese.  I had never seen such a thing.  I was not much for soup when I was younger, so this concept was foreign to me.

I immediately asked my best friend what it was, and she gave me a “duh” look, and said “it’s French Onion Soup.”  I was definitely taken by the spectacle of the cheese melted over the bread on top.  Forget the onions and the broth, bread and cheese is good stuff!

It took me a few years to learn to appreciate the soup in it’s entirety aside from the traditional garnish.  Now it’s a tempting option every time I see it on a menu.  It has certainly become a comfort food for me, and a half decent French Onion Soup can make for a great day.

I was at Panera recently, having my typical debate between options and I then I saw French Onion Soup on the soup list.  I pulled an audible at the register and ordered the soup.  Even though it was just Panera soup, it really hit the spot and inspired me to give it a try at home. 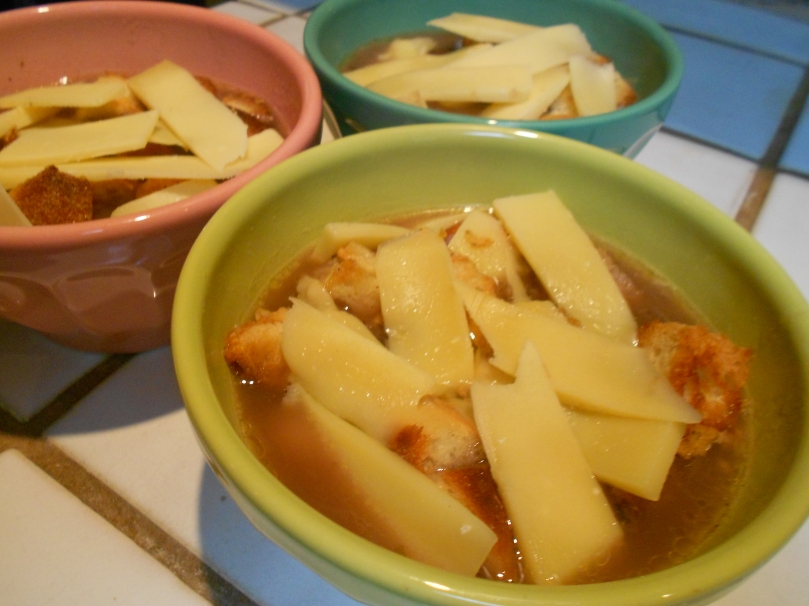 Favorite new shows of the season:

This show starts Mamie Gummer, who just happens to be the great Meryl Streep’s daughter.  Mamie resembles her mother’s looks and had inherited her wonderful acting skills as well.  Prior to this show, I have seen her on episodes of The Good Wife and also as a cast member of Off the Map.  She shines in this role of a slightly socially awkward doctor who has a crush on a coworker who went to med school with her.  When she tells him that she likes him more than a friend, she finds out that he does not feel the same way.  She now has to come to terms with that fact that he is always going to be a friend to her.  I’m sure she’s not the only one who has been in this situation!

Hayden Panettiere serves up a great role as the young country startlet who is overtaking the veteran  star’s place on the country charts.  This show sizzles with scandal.  Hayden’s singing isn’t too bad either.  Her songs from the show are even being featured on the country stations and can be found on iTunes.  I think she has found her career as a true country star.

This show is an adaptation of the comic book.  It reminds me of the Batman series.  A wealthy young man decides to become a vigilante to make his city a better place for everyone.  He was shipwrecked on an island where he seems to gain his strength and endurance.  He has a list of people that he got from his father of who he needs to take down.  One by one, he will turn his city back into to its original state with the help of the DA/former girlfriend played by Katie Cassidy, who I first saw in the recent version of Melrose Place.  I certainly wouldn’t mind it if he saved me because he is one handsome hero.