1. Rich Girl$ by Down With Webster. This song covers the classic “Rich Girl” by Hall and Oates for the chorus. It’s a little bit of a cheesy rap song, but I like how puts a new spin on a classic. It’s a fun, poppy rap song. This is not a new one, but I just discovered it thanks to a suggestion from iTunes.

2. Take Me Home by Cash Cash feat. Bebe Rexha. I got hooked on this song at the gym. It’s been in the mix of my favorite spin class the last couple weeks. I’m a little confused with the message of the lyrics, but it’s a great workout song to get you blood flowing.

3. The Man by Aloe Blacc. I feel like this is the male version of Roar by Katy Perry, except a lot more chill. It’s basically just a string of quasi-motivational statements strung together as lyrics, but there’s something appealing about it. Even though it’s slower, it could definitely work as a gym song I think.

4. Talk Dirty by Jason Derulo feat. 2 Chainz. Another song poached from spin class. I’ve been listening to the sample of this song in iTunes for a few weeks, then I heard it in spin class, which confirmed to me that it was a keeper. Definitely on the explicit side (a different side of Mr. Derulo), but it has some unique melodies in it.

5. Team by Lorde. I’m not sure why I like this one, but I do. My jury is still out on Lorde, but I’m staying tuned for the moment. My favorite lyrics: “I’m kind of over getting told to put my hands up in the air, so there.”

For our most recent potluck dinner at church, I decided to make a twist on the traditional cupcake.  Since it is always easy to make small portions for people to take a little bit of everything, I turned meatloaf and mashed potatoes into cupcakes.  Simply take you favorite meatloaf recipe and put it into a mini muffin pan. 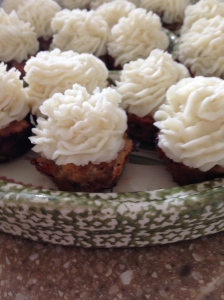 As a final step, I sprinkled the top with paprika and embellished them with piece of green pepper.  The final result is adorable.  It’s a great way for kids to have fun in the kitchen as well!

Now that I’ve got my living room in order, and I’m over the hump of the holidays, it’s time to shape up my bathroom and bedroom. My current sheets and towels have seen many an apartment in the last six or seven years. And while they have served me well, I think I’m ready for something fresh, and with possibly a few less bleach stains (I love a strong bathroom cleaner).

My go to places for sheets and towels are usually Pottery Barn and The Company Store but I’m keeping my eyes open for other options as well. I would typically just run down to Bed Bath & Beyond, but I have this problem, I need my linens monogrammed…

While I typically love a crazy, multi-color, patterned duvet cover, and plain sheets, I’m thinking about picking a more zen duvet cover this time around. Here are some contenders so far (first 3 from Pottery Barn, last one from West Elm):

With towels I’m thinking about a dark dusty blue, somewhere between navy blue and royal blue, with a white monogram of course. Pottery Barn calls it Blue Harbor (of course my color isn’t in the picture, but it’s outlined in the swatches below):

Stay tuned! I’ll let you know what I pick!

What do you look for when you’re shopping for linens? Patterns? Thread count? Color?