Always do right.  This will gratify some people and astonish the rest.

Where was Mark Twain’s only permanent house?  You guessed it: Hartford, CT.  Just one of the many cultural attractions the city has to offer.  So of course I did the tourist thing and took a tour of the house.  It turns out, he bought five acres in Hartford after he got married and commissioned a house that is truly unique.  They did not allow photography inside and I forgot my camera, so I borrowed some pictures from the house’s site. 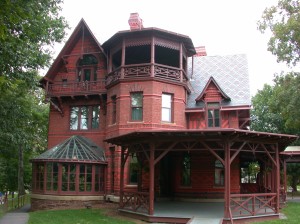 Here’s the kicker.  The deed was in his wife’s name because it was her family’s money that bought the house.  Mark Twain (actually Sam Clemmons) made a lot of money over his life, but was also very good at spending it and sinking it into stupid business ventures.  One reason this field trip intrigued me is the similarities I found between SC and Thomas Jefferson, one of my all time favorites (except for the Hemmings stuff), Clemmons also seemed like a renaissance man.

The house is a patchwork quilt of design elements from different cultures and periods in time because Clemmons traveled a lot.  There is a lot of great metallic stenciling on the walls with Middle Eastern and Indian influence.  Also a lot of fabulous Victorian furniture that was fashionable when the house was built basically because it showed off the family’s wealth.  Here’s a mantle that he had shipped from a castle in Ireland.

Clemmons had four kids total, but his only son died as a baby and only one of his daughters out-lived him.  It was clear that the girls basically ran the house and Clemmons loved them.  He did, however, find the need for a man cave, or man attic to be more precise.  He created a pool room/office on the top floor where he wrote some of his best work.  And I stood in the room where it all went down (a pink mancave? Someone was secure with himself). 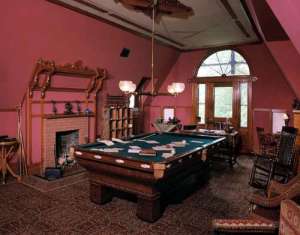 It’s pretty impressive that they recreated the whole house, because while the skeleton pretty much stayed the same, the house went through multiple owners and was even a school at one point between the time when the Clemmons inhabited the house, and the historical society decided to restore it.  There are fragments of authentic wall paper and some of the furniture is original to the house or the family, but I wonder how close it is to the real deal.  They said his last living daughter helped describe the rooms for the restoration, but frankly I’m not sure how many details an elderly woman would remember about her childhood house.

Some of my favorite words of wisdom from the man himself:

A man cannot be comfortable without his own approval.

I don’t give a damn for a man that can only spell a word one way.

I have never let my schooling interfere with my education.

Grief can take care of itself, but to get the full value of a joy you must have somebody to divide it with.

PS- All of this information is stuff I retained from the fabulous tour guide at the house.  It was a good time, you should stop by if you’re in the area.

3 thoughts on “Always Do Right”